All posts in Ungarn

50th anniversary board meeting of the Hungarian Association of Heilpedagoge 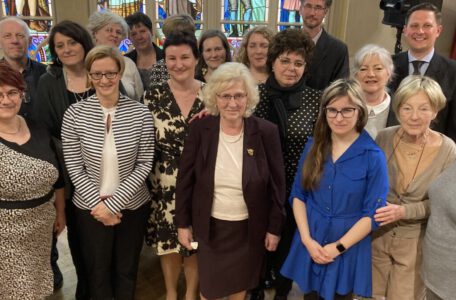 Roots and wings – summary of the 50th anniversary board meeting of the Hungarian Association of Heilpedagoge
The recently elected new board of the 50-year-old organisation celebrated its 50th anniversary with a jubilee board meeting and the introduction of its new board.The Association, which deals with the issues of special education and disability in a comprehensive way, celebrated its anniversary on 30 March 2022 in the Nádor Hall of the School for the Blind.

Dr. György Házlinger, the head of the Central Pest School District, and Dr. László Kiss, the specialist service and curative education officer of the Ministry of Human Resources, also attended the ceremonial meeting of the Board and welcomed the participants.

Dr. Ferencné Gereben, outgoing President, highlighted the organisation’s diversity and flexibility to respond to social and professional changes. She said that the Association was „the bearer of the tradition of curative education“ and that its activities were guided by a sense of professional continuity. These roots are the roots to which „together we are strong“, and it is the joint thinking of representatives of the various disciplines that will keep MAGYE going for the next 50 years. At the end of his speech, he outlined the work ahead for the new presidency, for which he wished them strength and perseverance.

Newly elected President Tamás Reményi, in his speech, spoke about „the glorious past, the hard-working present and the hopeful future of our association“, and presented the 5-point justification for the founding of the association, and the association’s past, present and future tasks. The objectives set out at the beginning are still valid today, albeit in different words. They include the unity of theory and practice, international relations, dissemination, support for integration and professional advocacy.

In view of the epidemic situation, the number of members and professional leaders who could attend the ceremony personly was limited. With the possibility of online broadcasting, nearly five hundred people attended the event.